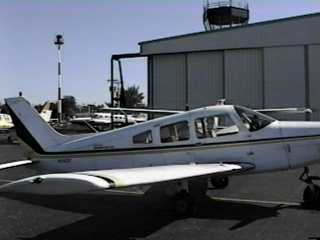 Several weeks ago my CFI told me that when his students get far enough in their training, he likes to take two of them on a dual (triple?) cross country. One student flies the plane while the other rides in the back, and the cost is split, so the hours spent as a passenger are free. It gives us a chance to relax, enjoy the flight without doing any of the work, and hopefully learn something from watching the other student. 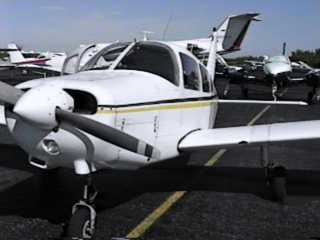 Today the three of us went to Key West International Airport (EYW). (See the map below.) We took a Warrior since the other student owns it. (The 152 I normally use barely holds two people; the Warrior can take three and a half, or four without much fuel.) That also gave us the opportunity to go for the day since the plane didn’t have to be back at any particular time.

The weather forecast for this morning was locally dense fog. It was clear at my house, but in the 15 minute drive to the airport I passed through some areas where I couldn’t see more than half a mile in front of me. Morning fog usually burns off quickly, so I didn’t expect it to be a problem. I got to the airport early and called for a weather briefing. 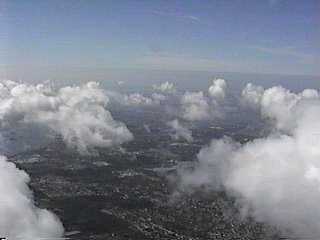 The conditions were supposed to be marginal for the next two hours for half the area we were planning to fly through. Our CFI arrived, looked at the weather data for the route, saw that the skies were generally clear above the fog, and filed an IFR (instrument) flight plan so he could get us out of town without a delay.

By the time we finished our planning and preflight, however, the fog was gone, and we were able to go VFR. I had volunteered to fly the first half (so I could do the landing in Key West- pretty clever, eh?).

We intended to fly at 5500 feet, but for the first half hour or so, I had to stay below 3000 and zigzag a few times to avoid clouds. I called St. Petersburg to open the flight plan and Tampa to request flight following.

Eventually I got back on course and climbed to 5500, almost twice as high as I’d been before, and above the (statute) mile mark. It was also the first time I’ve flown above clouds. 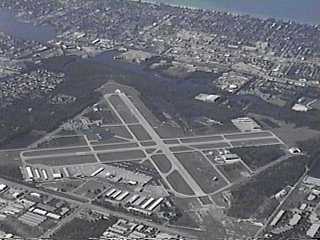 That’s Naples (APF) on the left.

When we passed over Fort Myers (now Southwest Florida International Airport-RSW) I turned due south toward Key West. A few minutes later we were over the Gulf of Mexico, and shortly after that passed the last land we would see for at least a half hour.

The next checkpoint was our destination. There was nothing to see but sky, water, sun, and an occasional bird or boat, but it was fun flying over international waters. The flight from Tampa was about 220 nautical miles, about 85 of which were over open water. We were about 30 miles from land during that part of the flight. 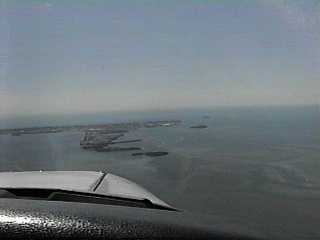 The air over the Gulf was as smooth as could be, partly due to the lack of clouds, and also because there’s no land to deflect the heat and cause turbulence. Navigation was easy- all I had to do was fly due south.

If I had been off course to the east, there are 150 miles of Keys to point me back to Key West. Too far to the west, and the absence of land after enough time had passed would have been a clue as well. Once we got past Naples, there was no traffic until Key West was in sight. 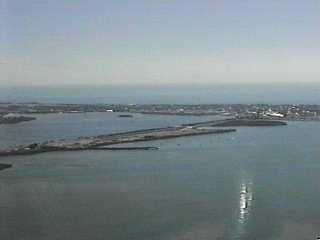 We had a decent tailwind and got into Key West in 2 hours, 5 minutes. The airport was busy, and since it is within three miles of a Naval Air Station, some traffic heads for the wrong airport.

Somebody else did that right before we arrived, and proceeded to tie up the Key West control frequency by arguing with the controller. That makes it hard for the tower to do its job, so we got a nice aerial tour of the islands waiting for them to get back to us. 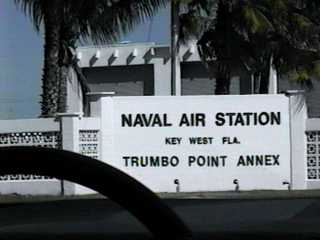 (There’s little excuse for mistaking one airport for the other on such a clear day. Key West has a simple east-west runway; the NAS is much larger with several intersecting runways. Another clue is that the NAS is the one with all the military planes!) 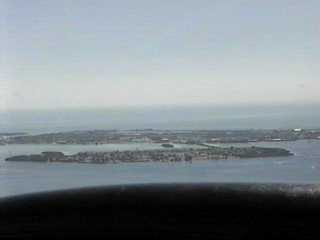 Due to the unique geography of Key West, I was over the Gulf of Mexico and the Atlantic Ocean while waiting for a clearance. It was sheer torture flying around the island waiting to land!

We took a cab into town and had lunch at Jimmy Buffett’s Margaritaville restaurant, which is not a tourist trap. We walked around a bit and caught another cab back to the airport. While waiting to leave, we saw a large jet make a landing as bad as any I’ve ever done; it bounced several feet a couple of times. (That must have been embarrassing.) 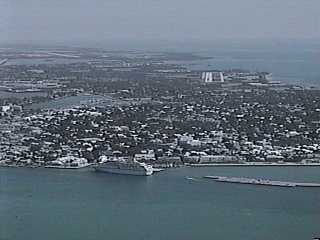 The ride back was the first time I’ve flown as a passenger since I started training. The military training area over the Gulf was active when we left, so we couldn’t fly the same route back. We flew northeast to the tip of Florida, then northwest to around Naples, where we got back on the due north heading to Fort Myers. There we were vectored around several times due to traffic we didn’t see and suspect didn’t exist. 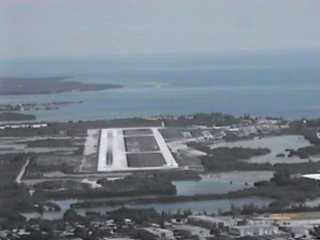 I was impressed how roomy the back seat of the Warrior was; I had more legroom than in any car I can remember, and there was a fair amount of room for baggage behind me. 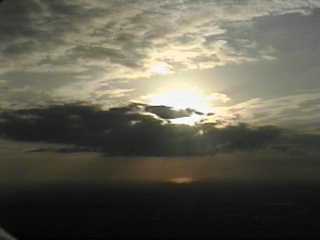 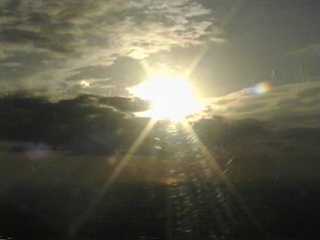