It was an interesting week, to say the least. At the end of the last lesson, I was told that if things went well, I would solo the next day (Dec 31). New Year’s Eve would have been a memorable day to solo, but for the first time since I started, the weather Sunday was too poor to fly (visibility 1 mile, ceiling 700 feet or less, 10-20 mph winds, rain). 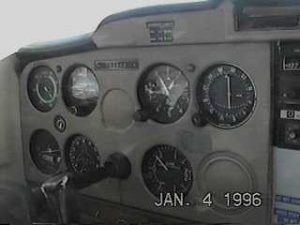 Maybe 15 consecutive flights in good weather exceeded my quota, but what a day to have unflyable weather. No problem, though, since I was able to book time for the next day.

New Year’s Day would have been a memorable day to solo, too, but the weather was even worse. By lesson time, the ceiling was down to 200 feet, rain had given way to thunderstorms, and the rest of the weather stats were as poor or worse than Sunday’s.

If you saw the Outback Bowl on ESPN from Tampa, the weather was even worse than it appeared on TV, since the stadium lights made it look like there was a bit of sun. My CFI tried the old trick of calling me and claiming to be waiting for me at the airport, but he didn’t know I was watching the Weather Channel at the time. 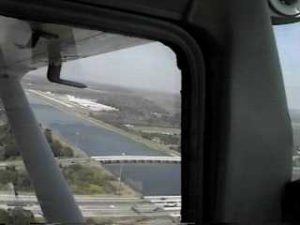 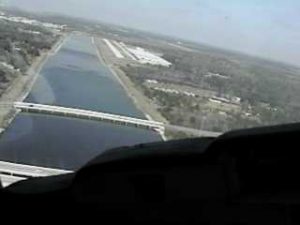 Winter is the dry season in Florida, and it rarely rains all day twice in a row any time of year, so what were the odds that Tuesday would make it a hat trick (a little hockey lingo there)? Apparently pretty high, because that’s what happened. By 5pm, 41 hours into the new year, we had received 3.5 inches of rain in 1996.

The normal rainfall for the whole month of January is 2 inches. (It’s actually not the rain that grounds us, but the low ceiling and clouds that generally accompany a 2-inch-per-day storm.) To be fair, I hadn’t scheduled a lesson for Tuesday anyway, cleverly putting it off until the next day. Anyone see a trend developing here? 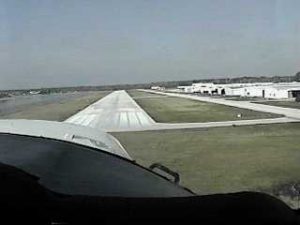 All pictures above and right are from my last presolo trip around the pattern.

The weather Wednesday started out OK, then worsened throughout the day until my scheduled time. The conditions were marginal and legally good enough to fly in the pattern (1-2 mile visibility, scattered clouds around 1000 feet), but obviously not solo weather. Some day we’ll do a lesson in that kind of weather, but not now.

Everything finally fell into place today. It was sunny and cool all day, with just a few scattered clouds and little wind. (Where was this weather Sunday?)

I noticed a few things out of place during the preflight- the checklists were missing from the book for our plane, the radio was set to 121.5 (the emergency frequency), and I couldn’t see any fuel in either tank. I had to wonder if this was a test to see how thorough my check was, or was it possible that somebody had actually run the plane out of fuel and made an emergency landing? (The answers: no to both.)

We did a few touch & goes, and then I was asked if I felt like doing a few by myself. During our last trip around the pattern together, we got my video camera out, and my CFI taped the last presolo landing (above). I dropped him off with my camera, and I took the plane. (Great trade, eh?) I did three trips around the pattern; the best word to describe the flight is “routine”, which is what I had intended. The plane performed a little better without the extra weight, but other than that, and the fact that I was flying an airplane by myself, it was just another Thursday afternoon. 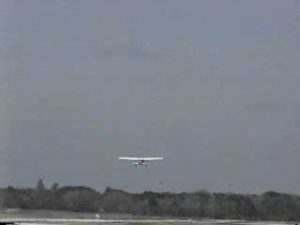 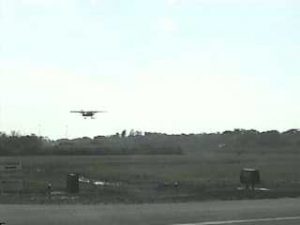 Some statistics: my time to solo was 17.2 hours, and the cost was about $1100, excluding books, headset, etc. For more info, look at my statistics page. 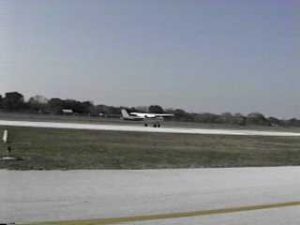 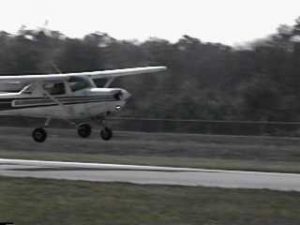 My first solo takeoff and landing, at about 2:15pm. 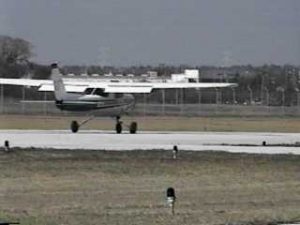 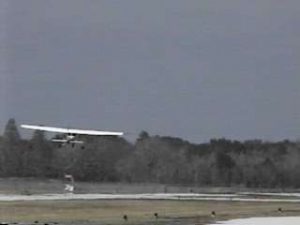 The second touch and go.