I found it easy to get used to the airplane. I only had a few hours in 172s, almost all with CFIs. My first solo time in a 172 was a few trips around the pattern a few days after the purchase. It was a warm evening (upper 80s), but I got a 1000 feet/minute climb. It seemed like a rocket compared to the 152 I’m used to flying. The only problem was that it didn’t want to come down. I had to reduce the power and put flaps down sooner than I’m used to in order to land where I wanted. I also need to fly a bigger pattern.

Two days after that, I went on a short solo cross country. It went well, except for some confusion with the heading indicator. When I adjusted it, I left the knob so the indicator couldn’t turn. For a few minutes, I thought I was doing a great job of holding my heading until I noticed that it was about 60 degrees off from the compass. (That’s what the first few flights are for, to work out these quirks.) I was happy with the airplane’s performance. Although it was about 90 degrees, I still got an 800 feet/minute climb. I wasn’t uncomfortable in the heat until I got out of the airplane. I measured the fuel before and after- I had only burned seven gallons per hour.

The next flight was at night. I had only flown one airplane before at night, so I just stayed in the pattern for an hour. The panel is as adequately-lit as the other plane’s. Now that I’ve learned where all the light switches are, I don’t expect to have trouble adjusting to this airplane at night. 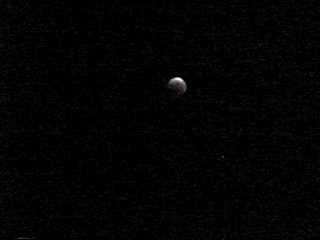 The second cross-country flight in the airplane was an opportunity to get used to flying it under the hood. I got an hour of hood time on two legs of the flight, about double what I had done before in one trip. The big question was whether the old-style heading and attitude indicators would be give me trouble, and the answer is no. I had been getting used to the DG already. I couldn’t form an opinion of the other without the hood, since then it’s pretty easy to stay level without looking at the panel much.

It took me a while to learn how to use all the stuff in the airplane, much of which was new to me. I spent the first month of ownership getting used to the airplane before starting my instrument training. I did some more cross countries and a couple of night flights, including one to get a closer look at the lunar eclipse, shown here.

Continue to Pros and Cons of Owning an Airplane.